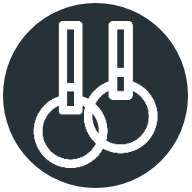 What is the Front Lever?

Visually, the Front Lever is a striking exercise. Those performing the Front Lever hold their body horizontal, with their chest facing upward. Ensure you're comfortable with your Rows and Pull Ups when beginning your Front Lever training

The Front Lever and its progressions can be performed with either a Pull Up bar or the Gymnastic Rings. We'll cover practicing using a Pull Up Bar, but the fundamentals are the same for both.

The Front Lever has various regressions that are suitable for those early in their calisthenics journey. Here is the most common Front Lever progression:

Tuck Front Lever: Tuck the knees as close to the chest as possible, and keep the body is horizontal.

Straddle Pike Front Lever: A lesser-known variation, and demonstrated in the corresponding video. Flex the hips and straddle the legs. This is progression bridges the gap between the Advanced Tuck and the Straddle Front Levers

Straddle Front Lever: Begin at the previous progression but bring the hips level with the rest of the body. Keep the legs wide apart

Front Lever: Bring your body to horizontal and squeeze the legs together.

Choose the preferred gender for your instructor:

How to perform the Front Lever

Begin the exercise in the Inverted Hang, with your hands shoulder-width apart. Put your legs in whichever position in your progression of choice requires. When in this top position, retract the scapular to prevent your chest from pulling forward, curving your spine. Try your best to pull the shoulder blades back and down throughout the exercise.

Slowly lower in to your Front Lever progression, and ensure your scapular remains in its correct position. Don't bend your arms as you lower down and tuck your chin to your chest.

For the progressions where the legs are together, squeeze them together and don't lose your full body tension.

If you find your body begins to curve into a banana shape, move into a regression. Ensure you can hold the regression for 20 seconds with good form.

Looking for your next challenge? The below exercises are more challenging progressions for the Front Lever.

If the Front Lever is too challenging, prime yourself with the following regressions.

You can perform the Front Lever with the any of the following equipment: